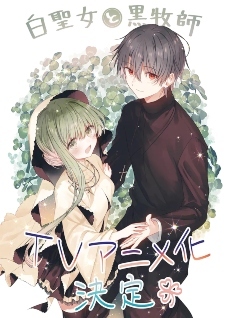 Publisher Kodansha announced on Thursday that a television anime adaptation of Hazano Kazutake‘s Shiro Seijo to Kuro Bokushi (Saint Cecilia and Pastor Lawrence) is in production. The main staff and an illustration (pictured) by the mangaka to commemorate the announcement were also revealed.

Kazutake began serializing the romantic comedy manga in Shounen Magazine R in April 2017. Kodansha shipped the tenth volume on June 16. Kodansha USA licensed the manga in English digitally in May last year. The ninth volume is scheduled to release on July 19.

Dwelling in the small outskirts of a peaceful town, Lawrence works as a local pastor for the townsfolk. When in need, he is responsible for guiding people to the church to visit the “Saint”—a symbol of good morals who heeds each parishioner’s struggles and grants them sincere advice. Cecelia, a kind young girl, is tasked to fulfill this role; however, this tiresome job quickly exhausts her. That, paired with her hidden somnolent nature, often causes her to laze around the church. This leaves Lawrence to care for the church all by himself. While Cecelia sleeps in anticipation for her next visitor, Lawrence caters to her needs alongside performing the church’s numerous responsibilities.

Slowly but surely, they begin to form a comfortable and trusting friendship with one another. Lawrence accepting Cecelia’s lax nature elates her while she grows accustomed to Lawrence’s overly-doting nature. However, as the adoring and absent-minded saint’s feelings for the dense and overly protective pastor progress past friendship, how will he respond? [Written by MAL Rewrite]