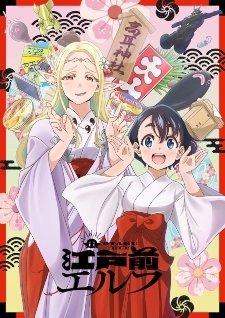 Higuchi began serializing the slice of life comedy manga in Shounen Magazine Edge in June 2019. Kodansha shipped the fifth volume on November 17, with the sixth volume scheduled to release on June 16.

Seven seas Entertainment licensed the manga in English in August 2020 and will publish the fourth volume on June 28.

Koganei Koito works as the teenage shrine maiden at the Takamimi Shrine, catering to the whims of its resident: a centuries-old elf who loves video games as much as she hates going outside! Line up your offerings for the otaku elf—some energy drinks, chips, and video games will do nicely—and watch her new friends scramble to keep up! (Source: Seven Seas Entertainment)