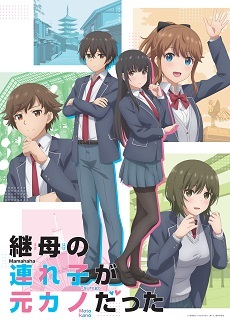 The official Twitter of the Mamahaha no Tsurego ga Motokano datta (My Stepsister is My Ex-Girlfriend) television anime announced two supporting cast on Thursday. The anime series is scheduled to premiere on July 6 at 9:00 p.m. on AT-X, followed by Tokyo MX, BS NTV, MBS, and BS Fuji.