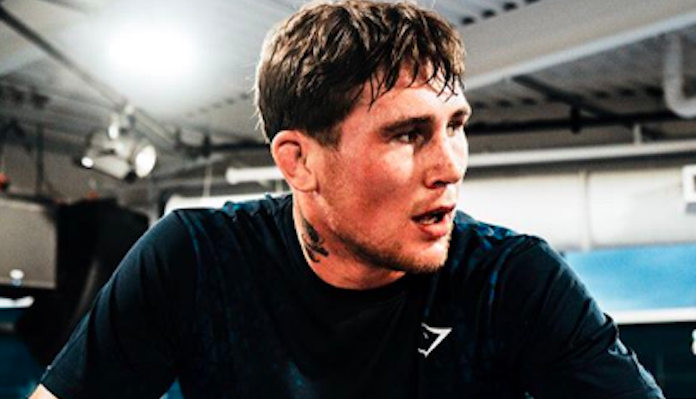 Darren Till has made a prediction on the Sean Strickland vs. Alex Pereira fight.

Strickland is set to collide with Pereira on the UFC 276 card set for July 2. Depending on who you ask, Pereira will either put Strikland’s lights out, or “Tarzan” will use his grappling to neutralize “Poatan.”

Till has taken to his Twitter account to offer a prediction for the fight. Till thinks it’ll be Strickland’s night to shine.

Sean Strickland going to take pereira down and submit him, you heard it here 1st.

“Sean Strickland going to take Pereira down and submit him, you heard it here 1st.”

Back in March, Strickland told The Schmo that he wanted to fight Paulo Costa over Pereira but he claims “Borrachinha” got cold feet.

“I called you out [Paulo Costa] multiple times before anything, and the UFC said ‘f*** no’, meaning I’m gonna beat the s*** out of you and they don’t want me to fight you. That’s what happened, I will show you the messages to them saying no I can’t fight you. So Costa, go f*** yourself and if I see you in Vegas, and you wanna run this s*** back, anytime you f***ing want dude let’s f***ing go. You don’t even need to make weight.”

Last month, Pereira told MMAFighting that he actually wants to take this fight to a decision to show off some variety in his MMA game.

“Honestly, I’m not thinking about a knockout. If it’s a fight [that ends] by decision, winning clearly, I’d prefer it. I want feel [the fight], you know? Just like the [Bruno Santos] fight — three rounds, a war, him trying to take me down and myself defending it. If I get taken down, I’m getting back up and maybe taking him down as well.”

UFC 276 will be headlined by a middleweight title fight between champion Israel Adesanya and Jared Cannonier. In the co-main event, Alex Volkanovski will put the UFC Featherweight Title on the line against Max Holloway.

This article appeared first on BJPENN.COM