The arrival of Microsoft’s Surface Book 3 has given mobile workers another option for a high-performance notebook-tablet hybrid, but could potential buyers be better served by an iPad Pro? Microsoft introduced updates to its Surface tablet range on May 6, including the iPad-like Surface Go 2 and the tablet-notebook hybrid Surface Book 3. As with…

The arrival of Microsoft’s Surface Book 3 has given mobile workers another option for a high-performance notebook-tablet hybrid, but could potential buyers be better served by an iPad Pro?

Microsoft introduced updates to its Surface tablet range on May 6, including the iPad-like Surface Go 2 and the tablet-notebook hybrid Surface Book 3. As with the preceding Surface Book 2, the third-generation offers a tablet with an attachable keyboard element, one which effectively turns it into a notebook.

With Apple’s continued push to make the iPad Pro line a highly portable workstation and a notebook alternative, especially considering the launch of the new Magic Keyboard, it seems more appropriate to pit it against Microsoft’s latest release.

While it may be more fitting to put the Intel-based Surface Book 3 against something like a MacBook Pro for a comparison, this wouldn’t take into account the simple fact that the Surface is also a tablet, something a MacBook cannot become without some considerable after-market alterations. The touchscreen interface and extra camera on the rear also makes a tablet-vs-tablet comparison more apt than tablet-vs-notebook.

The Surface Book 3 is offered in two varieties, equipped with 13.5-inch and 15-inch displays. Since they are both larger than the two iPad Pro screens at 11-inches and 12.9-inches, it’s understandable that Microsoft’s offering will be considerably larger than Apple’s version.

Though the Surface Books have luxuriously large footprints to accommodate the bigger screens, they are considerably thicker than the iPad Pro models, at 23mm to 5.9mm. The iPads are almost a quarter of the thickness of the Surface Book 3. 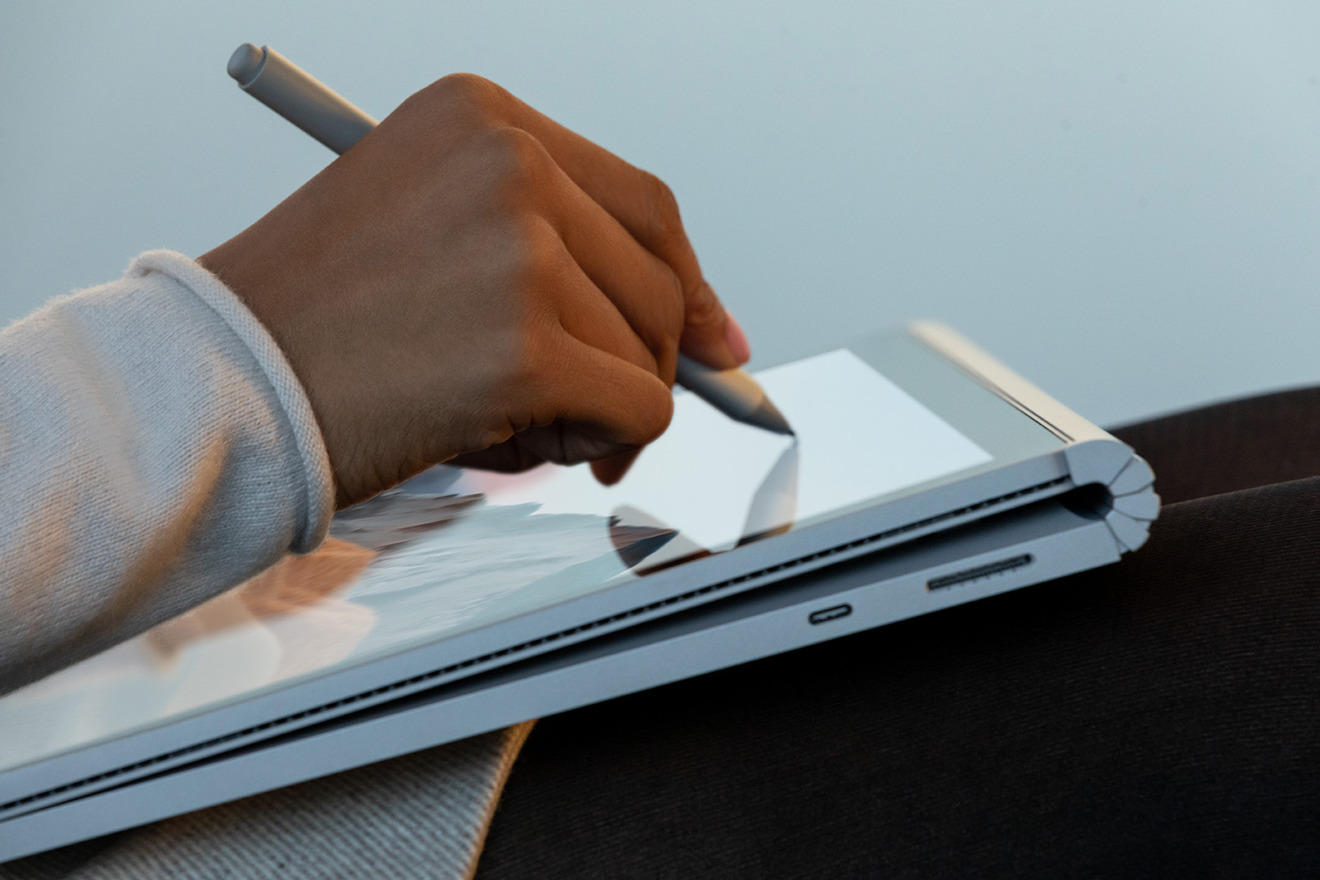 The Surface Book 3 keyboard could be attached backwards, storing it behind the screen while it is used as a tablet

The size difference also informs the weight, which again puts Microsoft at the heavier end. While the iPads are 471 grams and 641 grams depending on size, the Surface Book 3 weighs differently depending on configuration, ranging from 1.5kg to a hefty 1.9kg at the high end.

It is easy to forget that Microsoft does include a keyboard with the Surface Book 3, which adds extra weight and thickness to the overall package.

The equivalent on the iPad Pro side would be to attach a Magic Keyboard. In terms of weight, the combination of the larger iPad Pro model and its respective Magic Keyboard is a total of over 1.3 kilos, which still makes it lighter than the Surface.

Even so, while this does add heft to the overall iPad package, the final result is one that is roughly triple the thickness of the iPad Pro alone at 15 millimeters, but still far thinner than its rival. 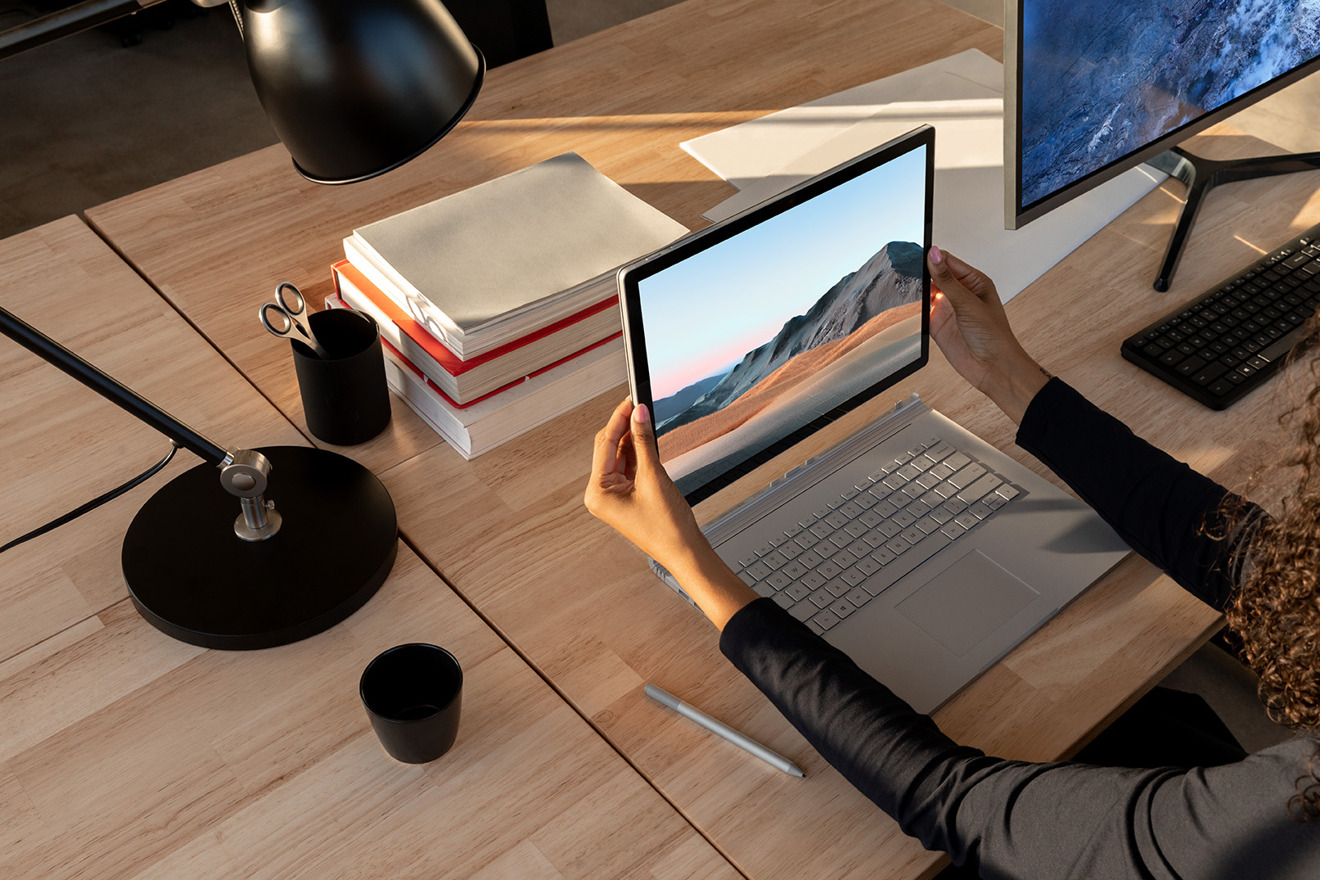 On the iPad Pro side, the Liquid Retina IPS wide color (P3) displays with ProMotion and True Tone have resolutions of 2,388 by 1,668 and 2,732 by 2,048, depending on the size. The resulting pixel density of 264 PPI for both models puts them in the same ballpark as the Surface Books.

The two are relatively comparable on paper in this regard.

Apple’s mobile processor performance has been improving steadily and has reached a level where it is at a par with desktop-bound equivalents, though it is only part of the equation.

The iPad Pro uses the A12Z Bionic SoC with the Neural Engine and M12 co-processor, paired with 6 gigabytes of memory. Under Geekbench’s testing, it scores 1,112 or 1,113 in single-core testing, varying by model, rising to 4,578 and 4,608 for multi-core tests.

While it is easy to said the Core i7 Surface Book 3 is the most powerful of the group, the fact that the iPad Pro is at roughly the same level says a lot about Apple’s designs, even with the memory disadvantage.

Outside of benchmarks, the Surface Book 3 is also assisted by Intel Iris Plus Graphics on the Core i5 model, an Nvidia GeForce GTX 1650 4GB GPU on the 13.5-inch Core i7, and a GeForce GTX 1660 Ti 6GB on the 15-inch model. The inclusion of the Nvidia GPUs will certainly help with graphic-intensive tasks and with applications that can take advantage of GPU acceleration.

As usual for Apple, the iPad Pro offers relatively few physical connection options, with the use of either a Smart Connector on the back or the USB-C port at the base. On the wireless side, it offers Wi-Fi 6 support and Bluetooth 5.0 connectivity, which covers a wide array of wire-free connection needs.

The Surface line typically goes further than Apple in offering connection points, and it is the same story again for the Surface Book 3. Onboard are a pair of USB-A 3.1 ports, a USB-C port, two Surface Connect ports, an SDXC card reader, and a headphone jack, as well as the same wireless connectivity as the iPad Pros. 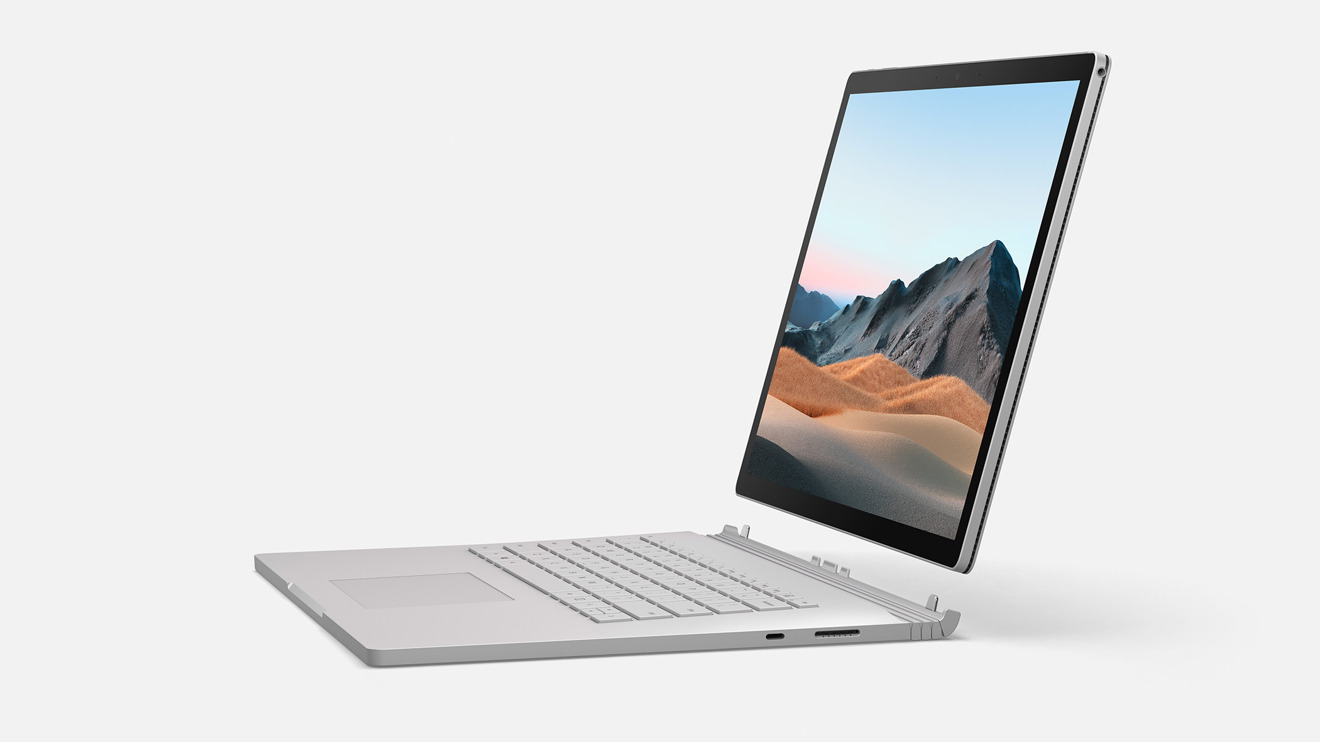 Microsoft keeps the card reader on the keyboard section

In terms of audio, the Surface Book 3 has Dolby Atmos-enabled stereo speakers at the front, along with dual far-field Studio Mics. The iPad Pro elects for four speakers, enabling sound to come out of the left and right channels correctly regardless of its orientation, and a collection of five microphones.

Battery life for the iPad Pro pair is said to be 10 hours of usage. Microsoft certainly wins here, as the 13.5-inch model provides up to 15.5 hours of “typical device usage” from a single charge, rising to 17.5 hours for the 15-inch model.

As the Surface Book and iPad Pro are usable as tablets, the camera situation is more important than within a notebook comparison. As one would expect, both offer better camera setups than the typical notebook.

The iPad Pro have the front-facing 7-megapixel TrueDepth camera that works with Face ID for authentication. Microsoft does drop behind here, as it only has a 5-megapixel camera on the front, though it is enabled for Windows Hello, its own facial recognition system. 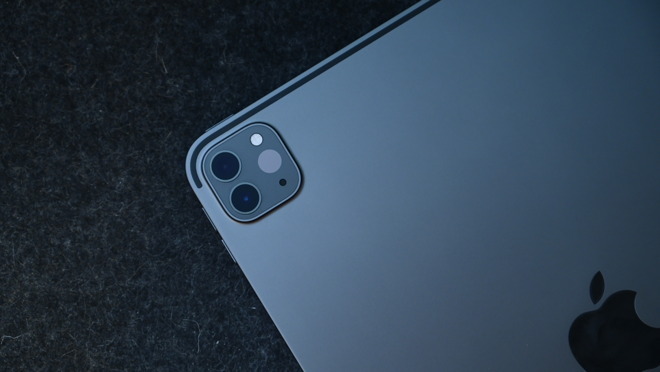 Around the back, Apple wins again, as the iPad Pro have the 12-megapixel wide and 10-megapixel ultra-wide cameras, and the new LiDAR sensor. The Surface Book 3 has a rear 8-megapixel camera with autofocus.

The lacking cameras on the Surface Book 3 also means it cannot record video at the same level as the iPad Pro. The Surface can capture 1080P video, while the iPad boasts 4K video at up to 60 frames per second, or 1080p at 240fps slo-mo. It can even capture 8-megapixel still images while recording 4K video.

Again, this is far from the whole story.

On the Apple side, pricing is somewhat cheaper.

Again, this also doesn’t take into account the keyboard, which is included on the Surface Book 3 but not on the iPad Pro. Though the Magic Keyboard may seem expensive at $299 for the 11-inch version and $349 for the 12.9-inch, this still doesn’t bring the price of the iPad Pro anywhere near the Microsoft equivalents.

If you went for the largest iPad at the highest capacity and added on the Magic Keyboard, you are still looking at a maximum outlay of $1,998.

The Surface Book 3 attempts to solve the problem of making a notebook work similar to a tablet. Apple has looked at things from the opposite direction, making a tablet work similar to a notebook. In either case, the companies involved have arrived at solutions that most people would probably be happy to use.

They’re portable, can be used for typing like a notebook, and offer the ease of a mobile device, all in one package. There is little to be concerned with here, as they both work in their own ways. 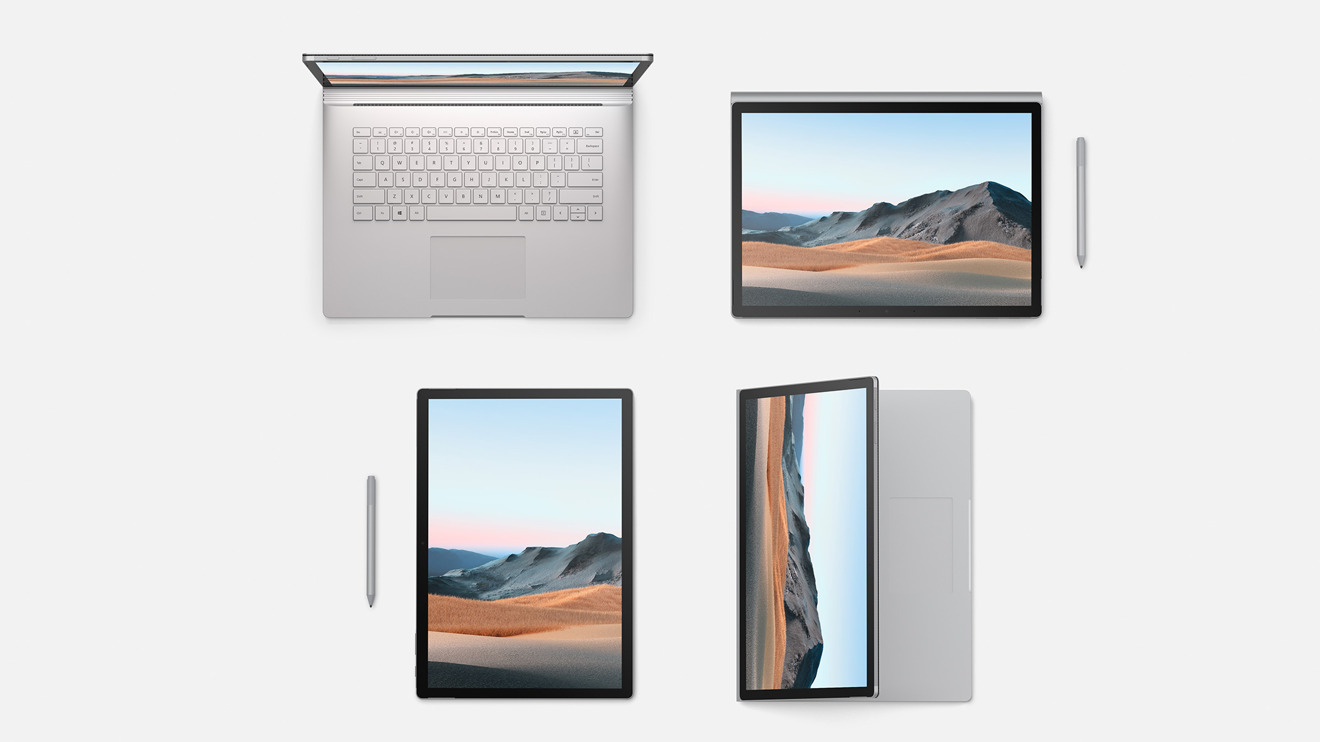 The Surface Book 3 in an assortment of orientations

The iPad Pro does offer benefits over the Surface Book 3 in a few key areas, such as mass and weight, the mobile-centric specifications like the cameras, and the massive difference in cost.

Meanwhile Microsoft’s hybrid does have its own benefits, including that extremely long battery life. There’s also features of Windows that iOS doesn’t offer, such as being able to install work-related applications outside of a digital marketplace like the App Store, and the ability to develop apps, something not really offered on Apple’s mobile platform.

It could easily be argued that acquiring a MacBook Pro instead of an iPad Pro would answer these shortcomings, though somewhat defeating the point of the comparison.

For those who need the graphical performance and are willing to pay for the higher amounts of memory, need to use Windows, and are willing to deal with a thicker and heavier device overall, the Surface has its audience. However, given that the vast majority of tasks you would want to do on a notebook could be performed on an iPad Pro instead, this does somewhat shrink the potential audience quite a bit.

Ultimately, if it’s a Windows tablet that’s required, the Surface Book 3 is an outstanding example of that kind of device. For everyone else, an iPad Pro will probably suffice.