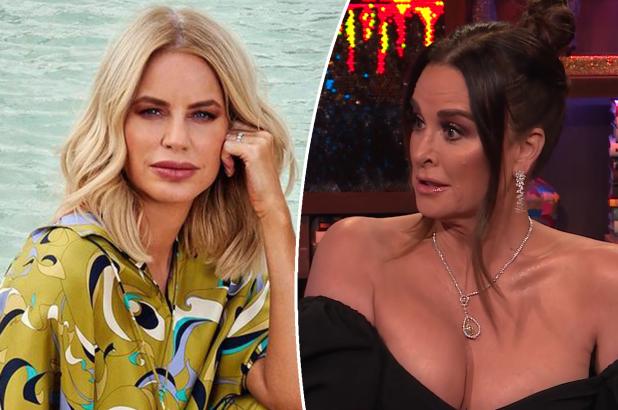 “hmmmm @KyleRichards pls clarify i had to borrow your jacket as my dress was see through i told you i loved it you said it’s from your store i bought it,” Stanbury tweeted.

Stanbury, 46, then tweeted a screenshot of her Instagram DMs with Richards, 53, in which the “Halloween” actress admitted her quote on “Watch What Happens Live with Andy Cohen” may have been taken out of context.

“Hi I just wanted to give you a heads up last night I was asked about you and the Dubai show and I said something about you borrowing my jacket & not wanting to give it back (because you had liked it so much) but I know you returned it & ended up buying one,” Richards wrote in the message. “Anyway, the show goes so fast never time to explain everything. Good luck with the show!”

The screenshot did not show Stanbury’s full response, but it began with, “yes i have been tagged about it a lot 🙄 and yes i bought it from your store.”

Andy Cohen asked Richards on “WWHL” Wednesday about her thoughts on Stanbury, whose “RHODubai” co-stars have not had great first impressions of the “Ladies of London” alum.

“Caroline Stanbury’s had issues with some of the women,” the Bravo host, 54, said. “We want to know if you agree with Nina [Ali]’s first impression of her. Do you find Caroline Stanbury to be standoffish? You’ve been on Bravo many years. Have you had a run-in with her? Do you know her?”

Richards then shared that the “only run-in” she had with Stanbury ended with her lending a jacket before claiming, “I didn’t get it back from her.”

Stanbury has been under fire recently after many of her castmates had some fighting words for the reality star, including Lesa Milan claiming that Stanbury’s good friend Ali had once called Stanbury “ghetto”, “trashy” and “ratchet.”

Chanel Ayan, meanwhile, said she felt like Stanbury and her husband, Sergio Carrallo, lack chemistry in their marriage, adding that it seems “more like wannabe, made-up chemistry over sexual energies on their Instagram pages.”

“The Real Housewives of Dubai” airs Wednesdays at 9 p.m. ET on Bravo.